Iam a newbie in Rails.Iam facing problem while installing.

i created my project going to sites

Then rails -v (it worked)

and i got this error

I uncommented in gemfile #gem therubyracer

still error is not being resolved,have searched but could not resolve the problem 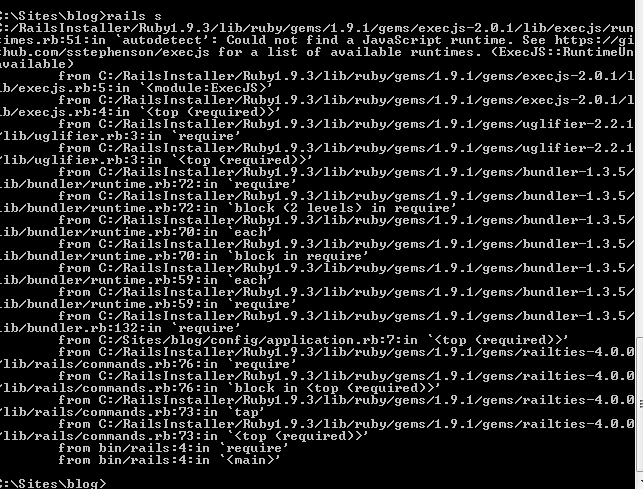 This question should be addressed to the rubyonrails talk list not core (which is for rails development issues). (Hint - run bundle install after modifying gemfile.)

This question should be addressed to the rubyonrails talk list not

core (which is for rails development issues).

All true, and this provokes the issue: can we set up the initial install to provide reasonable defaults so that it would “just work” out of the box? Has this been discussed?

The defaults already are reasonable, in my opinion. I wouldn’t mind hearing a concrete proposal to improve them, though.

Working outside-in, I’d say our goals should be:

So IMO the current set up isn’t reasonable because (1) the behavior is designed-in (I.e., we’ve designed Rails to fail) yet (2) we’re telling the user they’ve made an error. Also, (3) the error message is really just a fall-through which doesn’t give a high level semantic understanding of what’s going on.

Contrast this with the more helpful message of rake’s checking for db:migrations which haven’t been run.

I realized I could be more concrete. To achive the goals I named, we should:

I don't have the background to know if this is possible.

With respect, I think this might be where you're getting tripped up. Most platforms _do_ come with one pre-installed, but there are sometimes cracks. For instance, Windows is _supposed_ to have a default Javascript runtime installed: JScript. But you can't ever be 100% sure of what people's PATHs are, if they've screwed around with things...

I'm not sure how the error message could be made better: it says exactly what to do to address the problem.