Is it possible to speed up test boot time?

I have recently created an editor (Neovim) plugin to integrate with Rails default testing framework - minitest. Here is the demo video. With this plugin, I can open my test file, and run all the tests or a single test and the result will be reflected inside the test file itself. 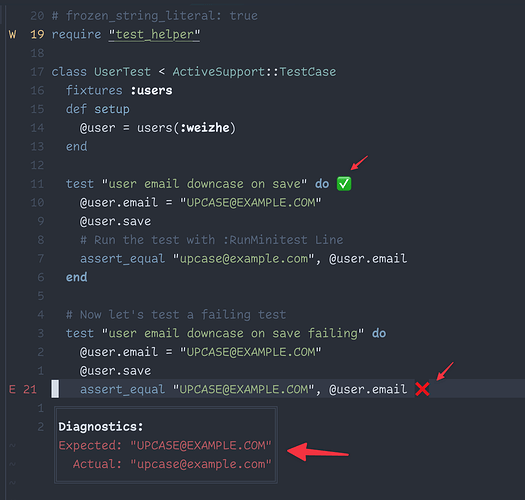 Things are going fine but I am hoping to make the process a little faster. If you watch the video you can see that the time taken from the start of running a single test case doing one assertion until the result is reflected in the editor takes around 4-5 seconds.

I did some checking on the time taken running this command:

And here’s the result:

Things that I have looked into

Appreciate it if anyone can give me some suggestions on if speeding up the test boot time is possible.

Take a look at test.rb and ensure you have the config below or false for eager load:

That said, as far as I know you won’t get much better boot time for tests, specially on a Mac (if you are using one)

Thanks for the reply!

The eager_load config is there, and yeap, I am using a Mac. Now I might want to try and run it on a Linux machine.

Is the slowness with all Macs, or only Intel or Mac Silicon? I experience the same issue with slow boot/test times with my quad-core 2017 intel i7 Mac. I’m curious if this is solved with the newer M1 or M2?

The problem is a Mac thing, not a processor thing. Sam Saffron tested it. Mac worse than windows too. Only linux has good performance.

Why I stuck with Windows for 6 years while developing Discourse.

The last comments in this thread offer some hope about M1/M2 but I’ve thrown in a question if anyone has feedback about it.

Why is Rails boot so slow on macOS? rubyonrails-talk

I still use an Intel mac but need to think about upgrading partly because of this performance issue. I would enjoy a switch to Linux but also need to keep an iOS development environment. Based on the 2 last comments, do I understand correctly that Rails now boots fast on M1/M2 macs (not much slower than comparable Linux machines)?

M1/2 boot time is very good, we see 1.5 seconds for Discourse, not many systems will even match that yet alone beat it