I’d like to propose (and offer to implement) additional functionality to the has_secure_password feature, and wanted to gauge the appetite for this from the core team and the community.

The has_secure_password method currently supports bcrypt which has been the industry standard for a good while. However, some advise suggests Argon2id should be the first choice for password hashing, and inevitably eventually the best practices will change (to this or another algorithm).

NB. Cryptography and trends in security best-practices isn’t my area of expertise so please correct me on the above if it’s incorrect

Given the ongoing progression of hardware it feels prudent to firstly support newer hashing algorithms, but also allow has_secure_password to be extensible going forwards.

My proposal would be as follows:

This would still default to bcrypt to prevent breaking changes.

Move the bcrypt version into ActiveModel::SecurePassword::BCrypt and delegate methods to that class/module.

Implement other algorithms (such as SCrypt and Argon2Id) which provides the same API as the BCrypt implementation.

Load the implementation based on the algorithm specified on the has_secure_password call (falling back to the default is none provided).

Each implementation can require the relevant underlying gem to perform the hashing.

Considering a future scenario where an app needs to make the switch from bcrypt to say argon2id, a developer could then do the following:

The new password could then be safely migrated and stored on successful login:

A suggestion was made for this back in Feb 2021, but rejected without rationale. There may have been perfectly valid reasoning for not considering with hashing algorithms at the time. If this is still the case I would be interested in understanding the reasoning.

Implement Argon2 as an alternative to using the BCrypt gem

### Steps to reproduce <!-- (Guidelines for creating a bug report are [availabl…e here](https://edgeguides.rubyonrails.org/contributing_to_ruby_on_rails.html#creating-a-bug-report)) --> None known. ### Expected behavior Using both/either `bcrypt` or [`ruby-argon2`](https://github.com/technion/ruby-argon2) should allow access to `has_secure_password`. ### Actual behavior Currently (as far as a relatively new person to Rails knows), only the `bcrypt` gem enables usage of [`has_secure_password`](https://github.com/rails/rails/blob/291a3d2ef29a3842d1156ada7526f4ee60dd2b59/activemodel/lib/active_model/secure_password.rb#L18), aside from external libraries which re-implement methods or change the behaviour of ActiveRecord models. As a comparison with other projects in a similar realm (namely, [Symfony](https://symfony.com/blog/new-in-symfony-4-1-argon2i-configuration) amongst others), Argon2 is an alternative to `bcrypt` which gives developers/users of Rails more flexibility in which password hashing mechanism will work "out of the box" with Rails. ### System configuration **Rails version**: 6.1.2.1 **Ruby version**: 2.7.2 Note: - If any of the above is inappropriate etc. for an issue, or isn't detailed enough, please let me know so I can amend/change the wording of the issue. - If this is already being worked on (and I've done a bad job searching for it), please close this issue. 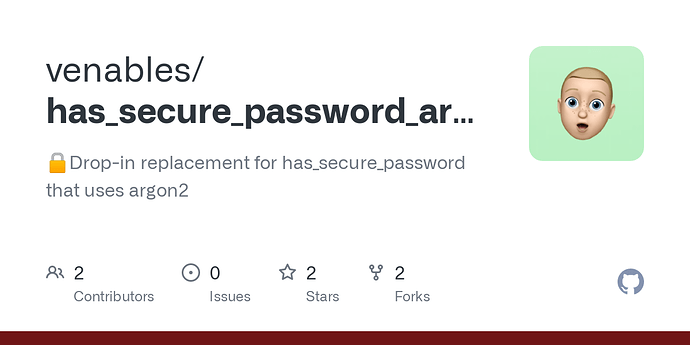